Photojournalists remain crucial to our understanding of world events, providing us with front-row views that would otherwise be inaccessible. Of the most universally recognisable images in photography, many are photographs of protests.

Mostafa Darwish, an award-winning visual journalist from Egypt, has spent nearly a decade working on stories around situations of protest, clashes and conflict, not just in his native country, but across the Middle East, Sudan and Turkey.

Maurice Oniang’o, a dynamic filmmaker and photojournalist from Kenya, hasn’t been short of international attention for his work covering issues such as FGM and climate change. His more recent work includes a documentary on police brutality, funded by National Geographic.

Together, Mostafa and Maurice, both alumni of the foundation, discuss the challenges of capturing dynamic images of social movements.

When tens of thousands of Egyptians filled Cairo’s Tahrir Square almost a decade ago, before and after president Mohamed Morsi was ousted by a military coup, Mostafa was on the scene using his lens to document the stories unfolding on the front lines.

His powerful photographs, showing rival groups of demonstrators, were published widely in international media, including The New York Times, The Washington Post, Reuters, Associated Press and The Guardian.

In one image, Mostafa focuses attention on a demonstrator using tear gas to separate him from the protestors behind. In another, he captures the magnitude of the participation in Tahrir Square, with a protester at the centre of the scene gesturing defiantly towards the oncoming crowds. 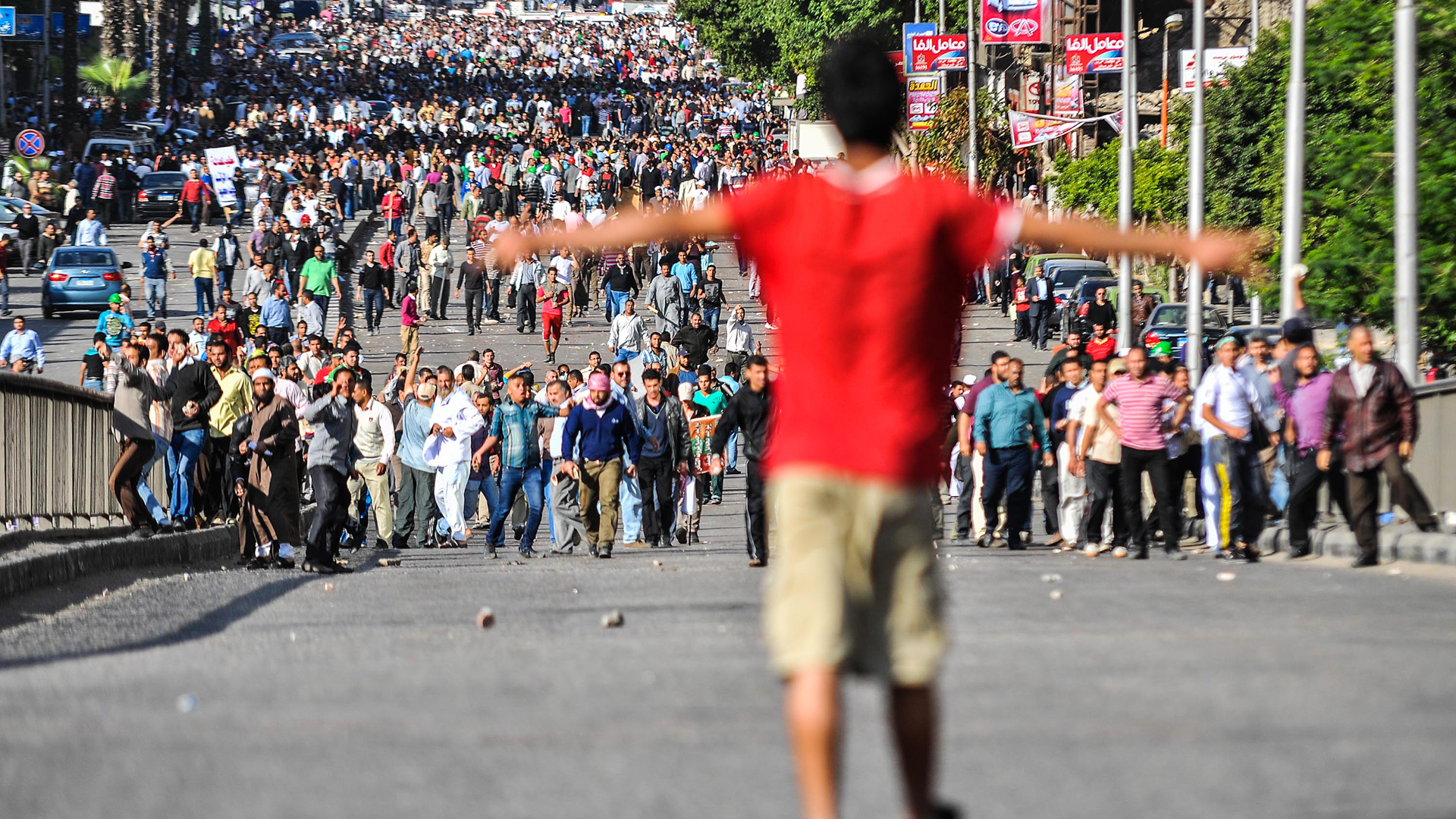 Asked what he wants people to take away from these images, Mostafa says that the photographs are simply a depiction of a moment in time.

“Documenting a protest with photos and video can be an important part of telling the story of what happened and when,” he says.” You are in this moment not just a photographer, you are a historian.”

While protests can be peaceful, they can quickly turn violent. “They are unpredictable, and they can transform from peaceful to dangerous in seconds,” continues Mostafa. “There is a long history of photojournalists putting themselves at risk in order to document these events.”

Mostafa has not just been in the line of fire during protests and civil unrest in Egypt, but often a target. “I was attacked by Egyptian security forces in 2013 when they raided a camp of protesters at Rabaa al-Adawiya Square,” he says.

A year earlier, Mostafa had sustained a head injury during a protest over the slow pace of change in Egypt.

“After I was injured in 2012, I started to wear a helmet,” he says. “In Rabaa, I knew there was a serious risk of being shot and I was more prepared for the unpredictable, wearing full protective gear, including goggles and a bullet-proof vest.

“I was mainly centred in a safe spot, only relocating now and then. Despite this, and the police initially being forthcoming with the press, things became dramatically more dangerous. I was attacked. I had my camera taken away. Random beatings, including of colleagues, happened right in front of me.”

Here, Mostafa revisits his work and explains the practical and ethical tensions at the heart of photographing violent protests. 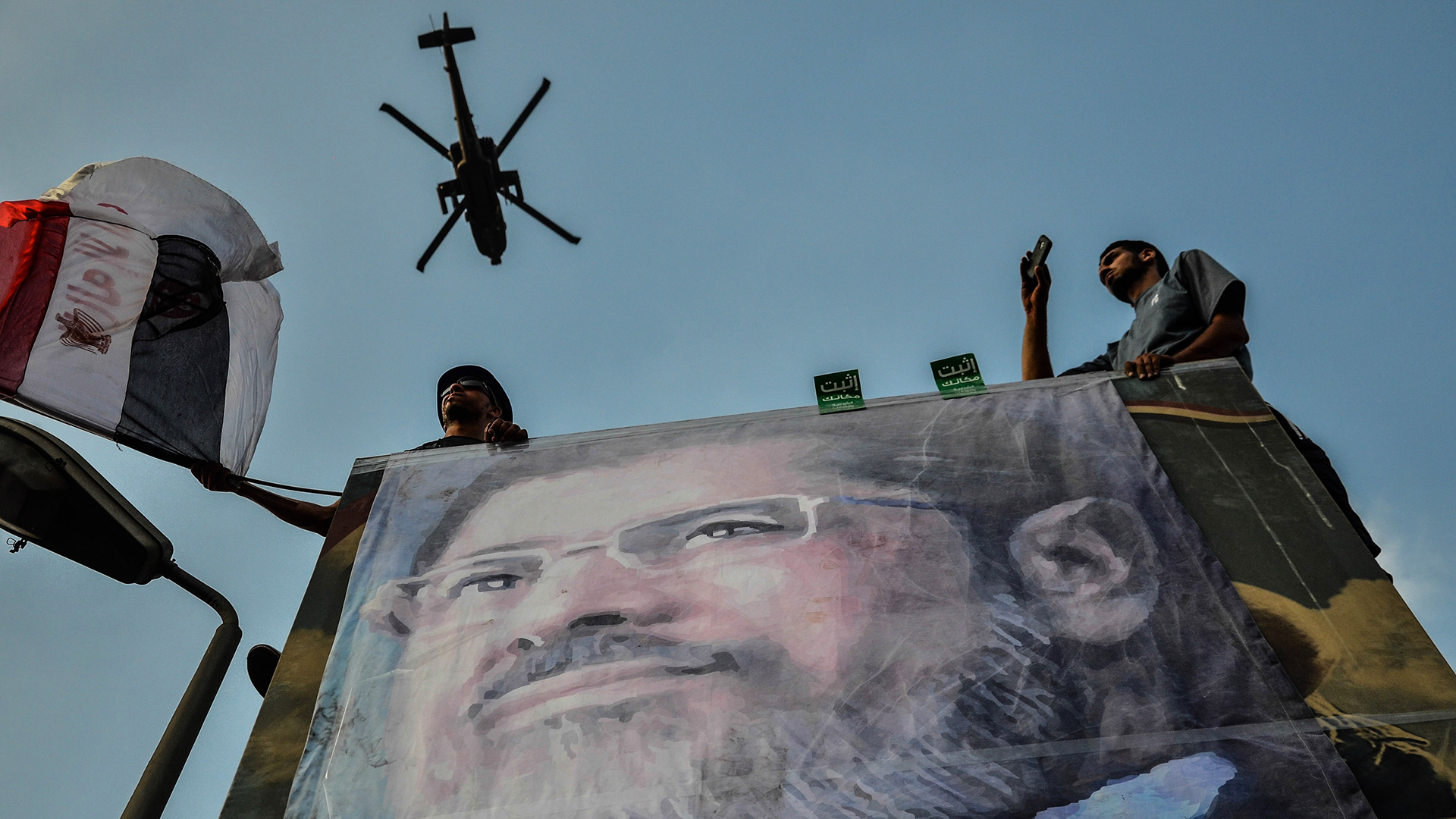 “A low-flying military helicopter was circling demonstrators in Tahrir Square, Cairo in July 2013, signalling that the military, who had ousted Morsi, had begun to take centre stage in a new phase of political life. This was one of the few moments of peaceful protesting. Shortly afterwards, the tear gas canisters ignited behind me and clashes between police and protestors increased.” 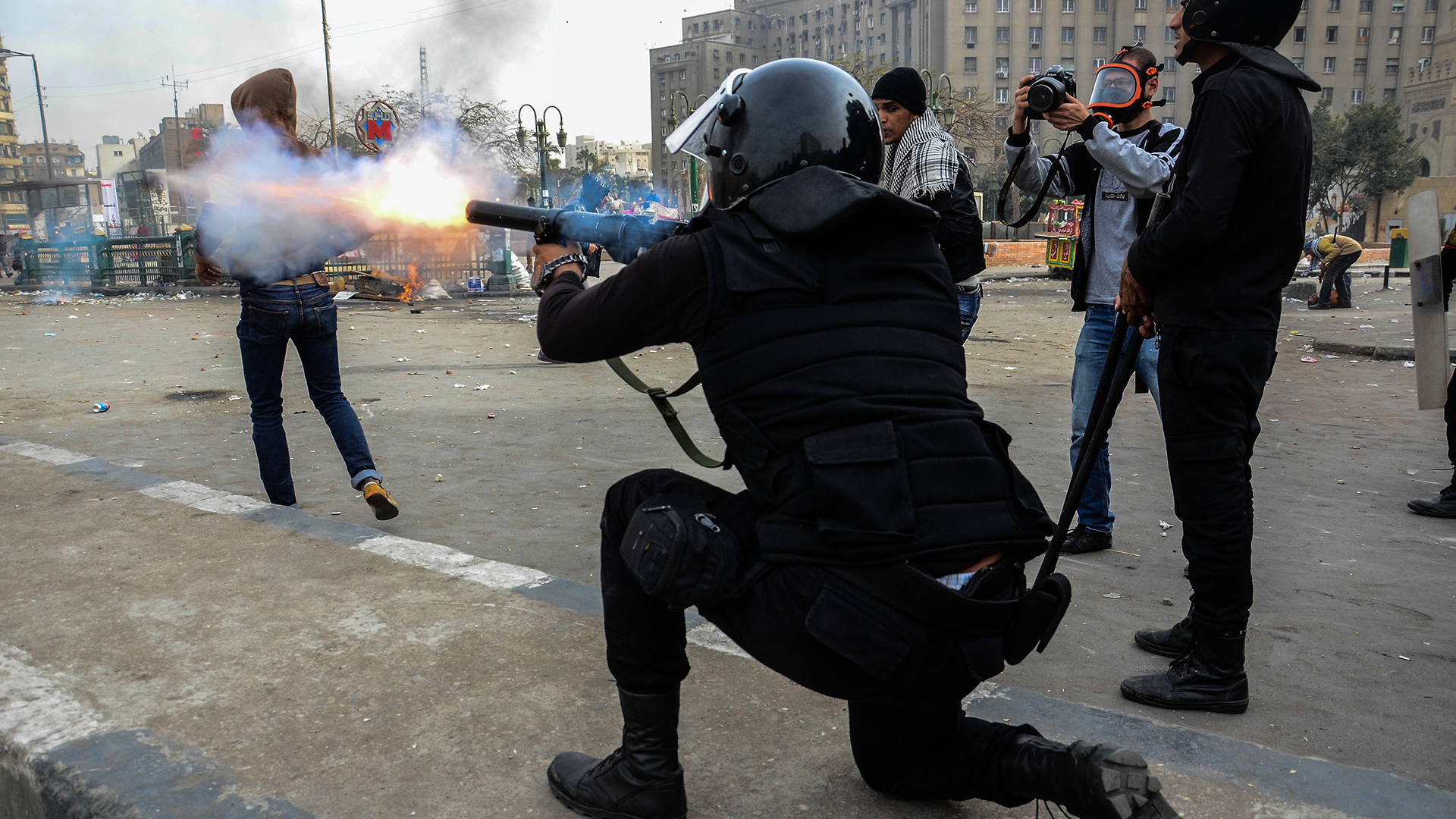 “Egyptian riot policeman were firing teargas to move back protesters in Tahir Square in 2011. Journalists weren't immune. Myself and colleagues were met with the same aggressive policing as the demonstrators. Some years on, and we’re seeing more images of police brutality around the world and of security forces repressing crowds and attacking journalists.” 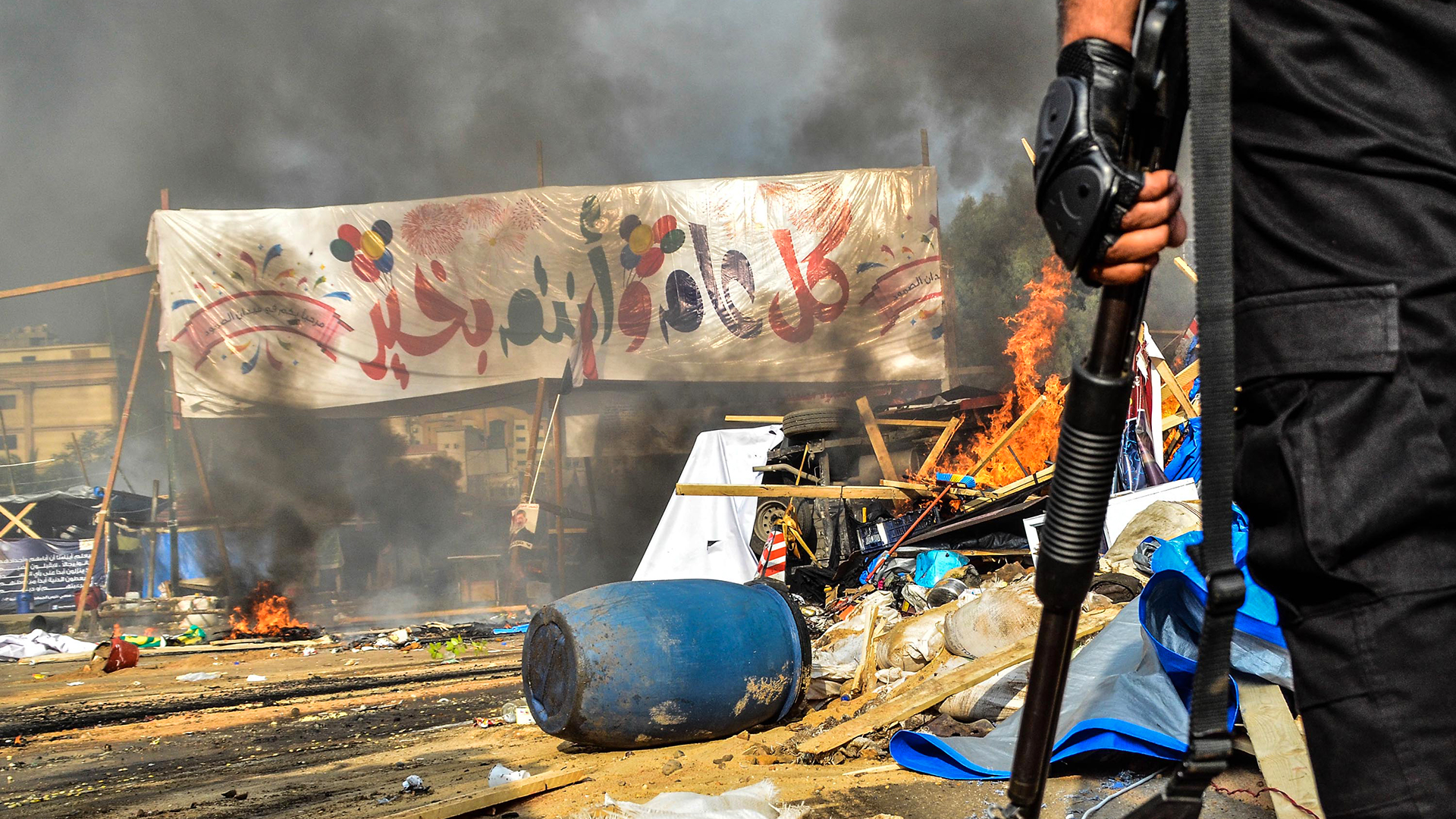 This was the aftermath near the Rabaa Adawiya mosque in Cairo on 14th August 2013, when Egyptian security forces cleared a sit-in of hundreds of supporters of Morsi. It was to become one of the deadliest days for demonstrations in Egypt. It’s a haunting image that came shortly after Eid al Fitr, when many Egyptians had spent time with family. Among the billowing smoke is a banner left over from the celebrations reading simply 'Happy Eid’ in Arabic.

Photojournalists who want to document any social issue, be it a riot, a clash or a protest, must always look to find a balance between being safe and staying close to the action.

“Try your best to understand the area of the events, the main streets or the side ones and the safest places to run or hide in case something happens,” explains Mostafa.

“It’s also important not to show any partiality with any parts of the protest, the protestors or the police, and to be close to people you know, in case you are injured or you need someone to help keep your equipment safe.

“Ideally, try not to use expensive gear. We know how important telephoto lenses are for events such as these, but really try to use cheap gear or stick with your smartphone. And whether it’s daytime or nighttime, don’t use your flash.

“Once your pictures are published, either by local media outlets or on social media, take screenshots and keep them in a safe drive. Some websites archive their news and governments can sometimes play a big role in removing certain material. Never delete the raw material of your coverage.”

Maurice was injured covering the annual nationwide Saba Saba demonstrations in July 2020, which calls for both an end to corruption and more investment in public services.

The 2020 event was given extra impetus by anger over police crackdowns during the Covid-19 lockdown. Caught in the middle of a scrum in the streets of Nairobi, Maurice wounded his leg. For a short time, he didn’t know if he had been shot or hit by something else.

“There was a lot of chaos and commotion,” he says. “I was shocked and had to go to the side of the road where it was slightly safer because I didn’t know what had hit me.”

He later told his Twitter followers: “I was hit by a teargas canister on my right leg. One of the issues protesters were protesting about was police brutality!”

Despite this, Maurice continued filming. “My colleague and I assessed the wound and decided I could continue filming. But after 30 minutes I was limping and in pain and needed hospital treatment.”

Here, Maurice provides a quick guide on shooting protests, keeping safe and what to do if you’re heading to a protest for the first time.

“Travel lightly, wear closed-shoes, have a backpack, carry water and consider going without a tripod," says Maurice. "There’ll be a lot of movement, a lot of running back and forth. A hard hat will also be useful when things are being thrown around, such as stones.

“Map the escape routes and don't get caught in the middle, between the police and the protesters. Always try to stay on the edge.

“Plan for an emergency. Have someone who can act fast if something happens to you. If you’re in a team, plan for a meet-up point if anything goes wrong, or when you’ve been dispersed or separated.

“Understand the mood of the protesters and the police, and if this is your first time documenting a protest, don’t go there blindly. Find someone who has covered them before that you can shadow and who knows how to behave and react in that kind of situation. Follow their lead for a more successful shoot.

“Keep that camera rolling. Keep recording, even when you’re running. Film anything and everything. If you stop and start, you’ll miss a lot.

“I’d also advise all photographers and filmmakers to carry an empty memory card. It’ll come in handy if anyone tries to take away your material. You have a card that you can give to them while keeping the material that you’ve recorded safe. This is key when you’re filming at a protest and don’t know how things will turn out.

“Lastly, be alert and scan your surroundings constantly.”

"If this is your first time documenting a protest, don’t go there blindly."

Contending with a pandemic, and being subject to violence and intimidation, our alumni are working hard to document current history movements and uphold the fundamental principles of media freedom. 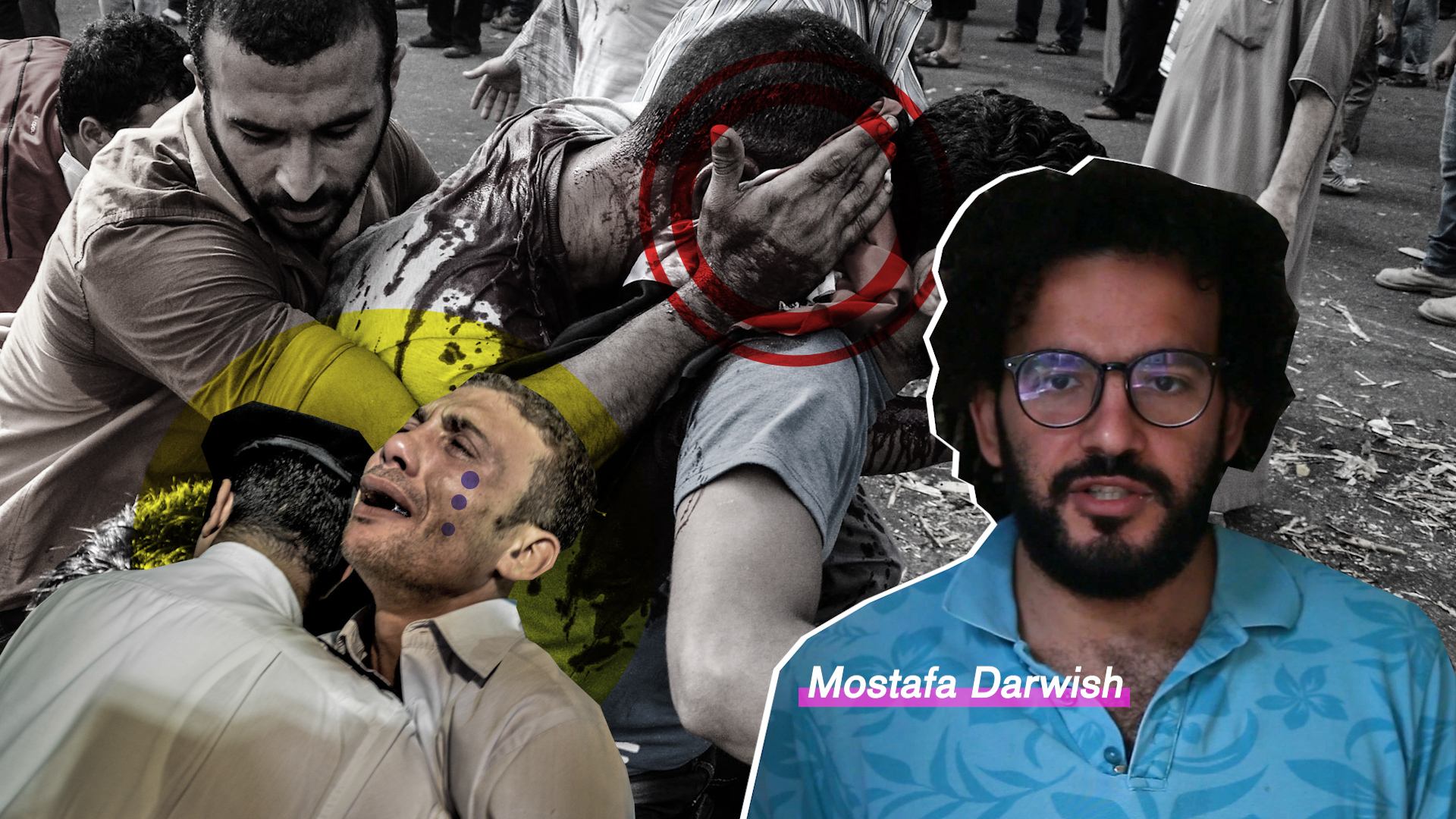 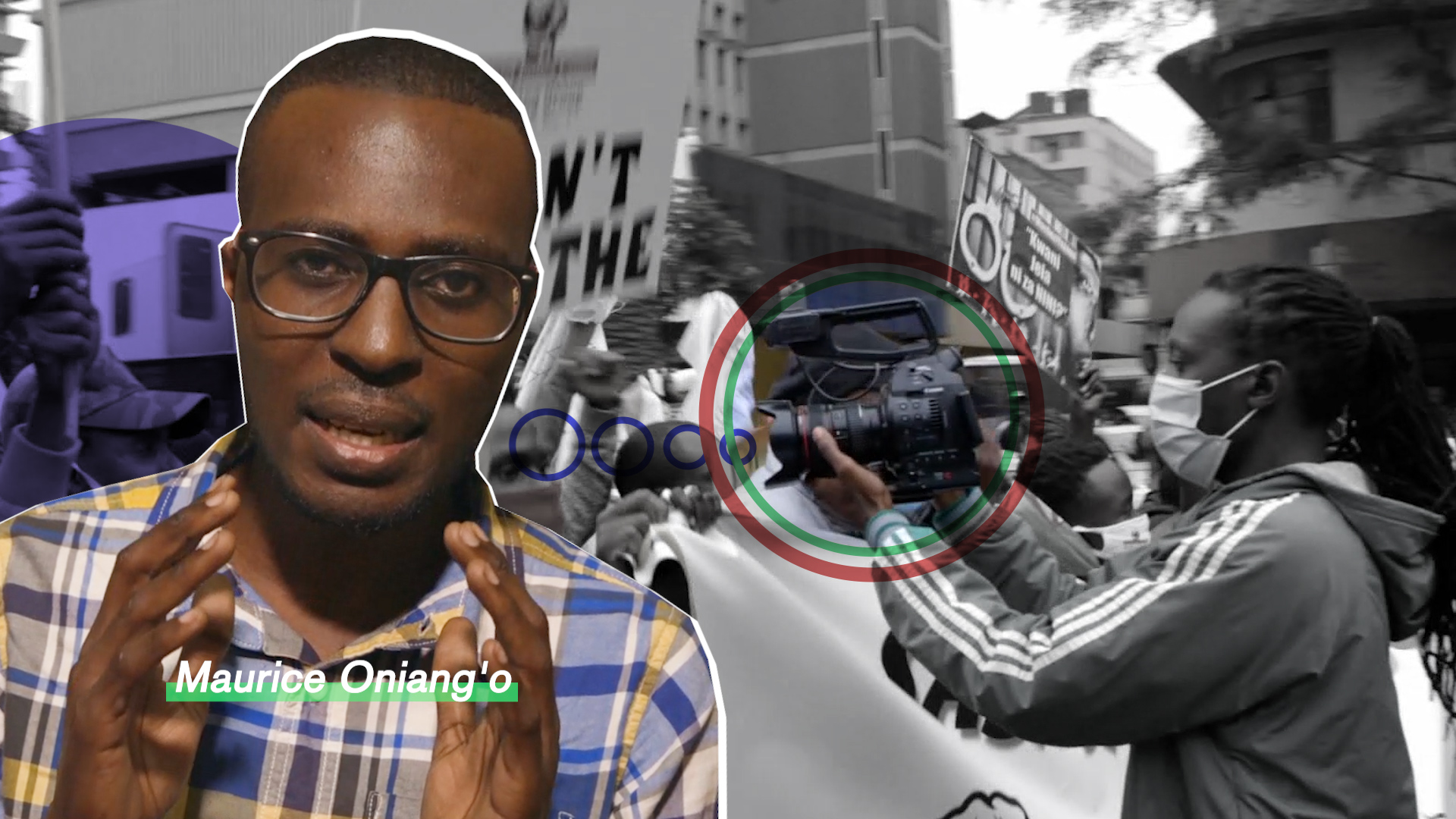 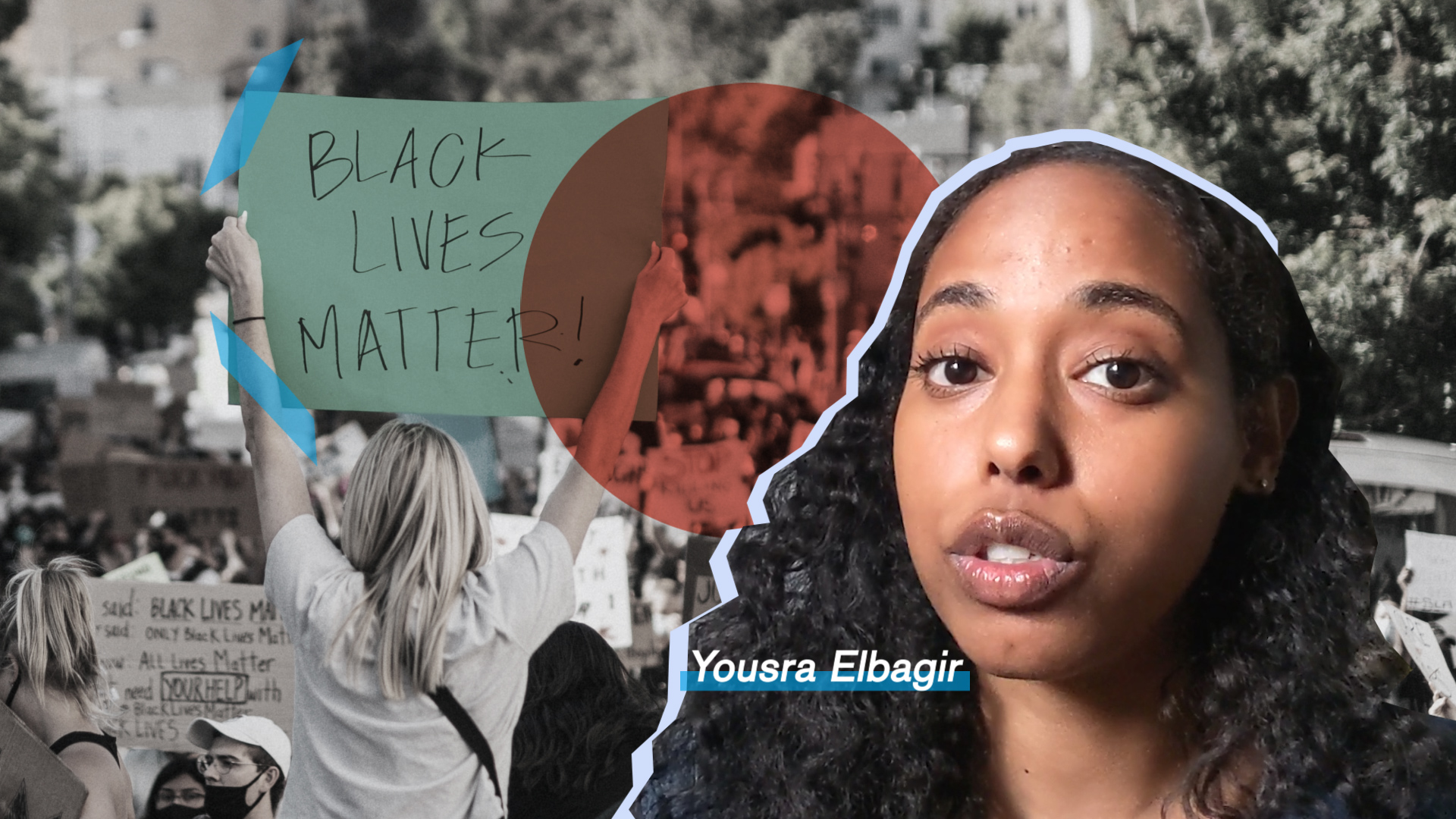 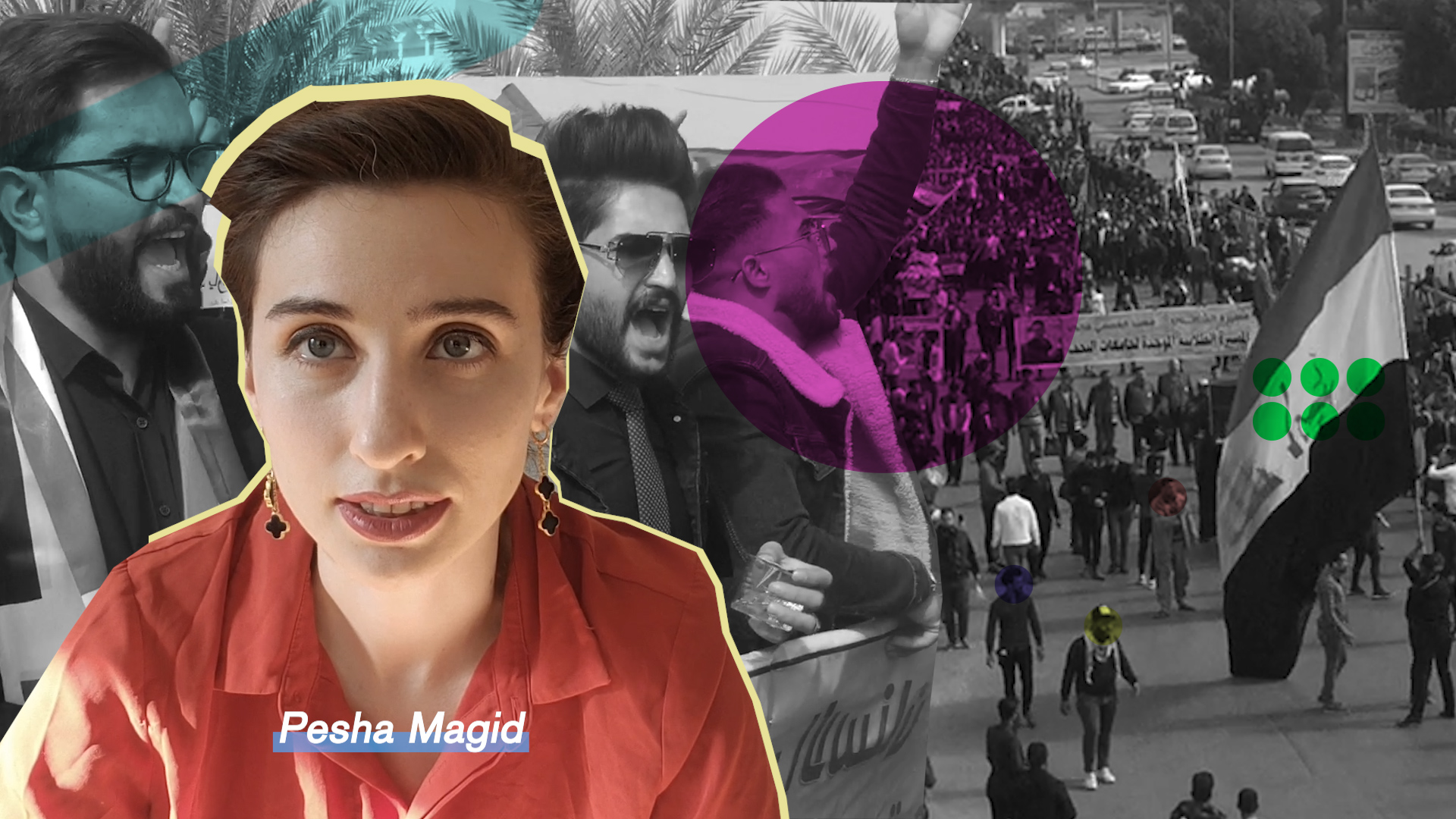