Encounters with a Sudanese artist pushing for a brighter future

A matriarchal figure is painted on a concrete wall on Jamhuriya Avenue, next to the University of Khartoum. Her face is not depicted. She wears a white toub – a traditional Sudanese garment that drapes around the body and loops over the head. Imitating the waves of the sea, her toub flows along the length of the wall, contrasting against a dark backdrop of a painted night sky while carrying silhouettes of people forward.

The mural – bearing the words “Noura dreams of an existence that has no restrictions, a homeland that has no borders, no soldiers, no oppressed, no oppressors” taken from a famous Sudanese poet – captured international attention in April 2019.

It symbolised the integral role women played at the centre of the pro-democracy protests in Sudan, fronting the uprising that ousted President Omar Al Bashir from 30 years of authoritarian rule. It represented how the country was unified in its wish to see change.

It was the creation of 23-year-old Khartoum-based visual artist and curator, Reem Al Jeally, one of the young creatives currently participating in Thomson Media’s training programme, NEW SPACES Media Labs with Goethe-Institut Sudan. 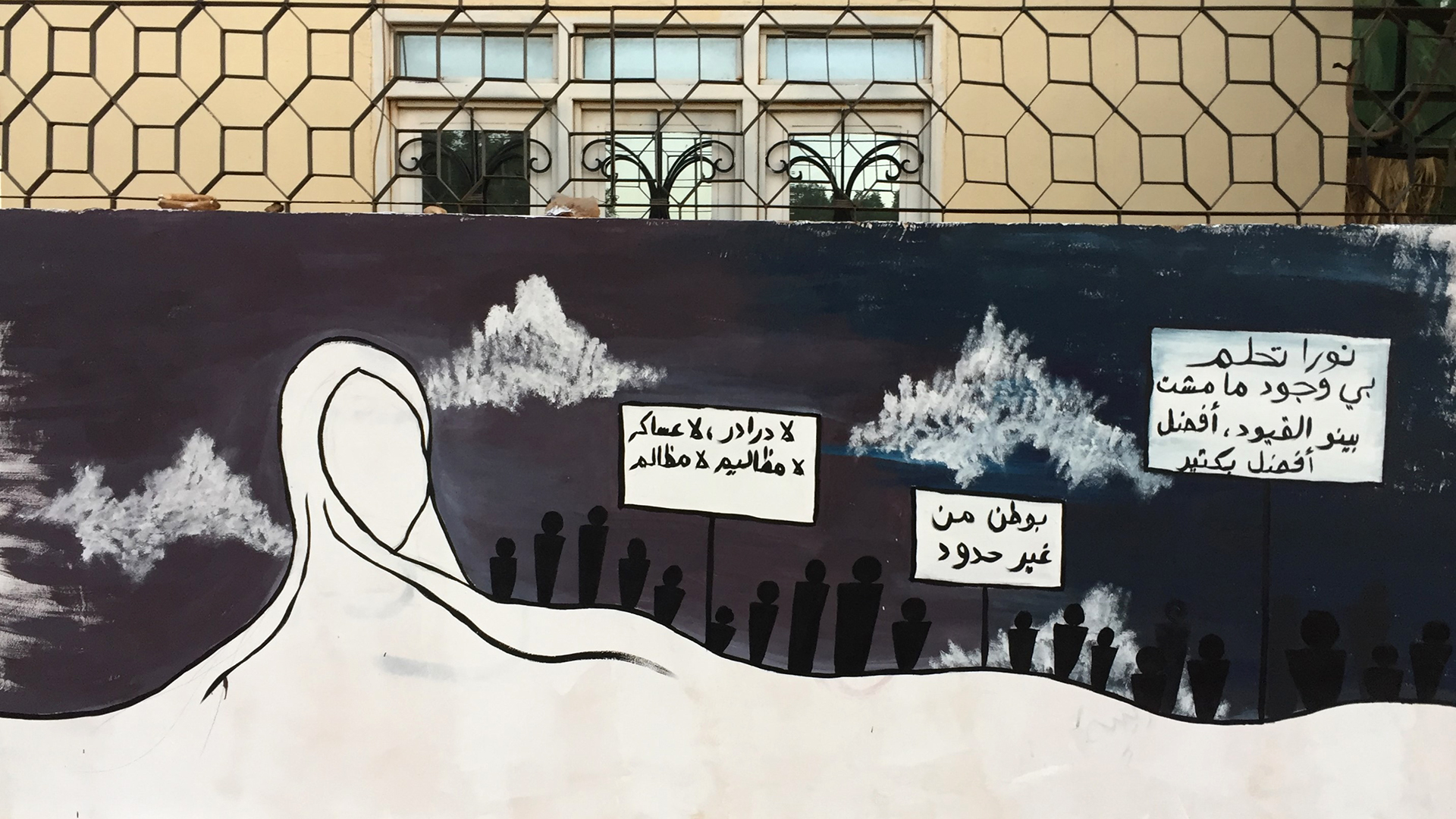 “The murals of the Sudanese revolution sit-in were a reminder of something astonishing,” says Reem. “They were a dose of strength you see in the streets.”

“I wanted to join the movement and art was the only way I could express myself and immortalise the revolution. My murals were about the bravery of Sudanese women. All three paintings had a leading female figure wearing a white toub, surrounded by her people.” 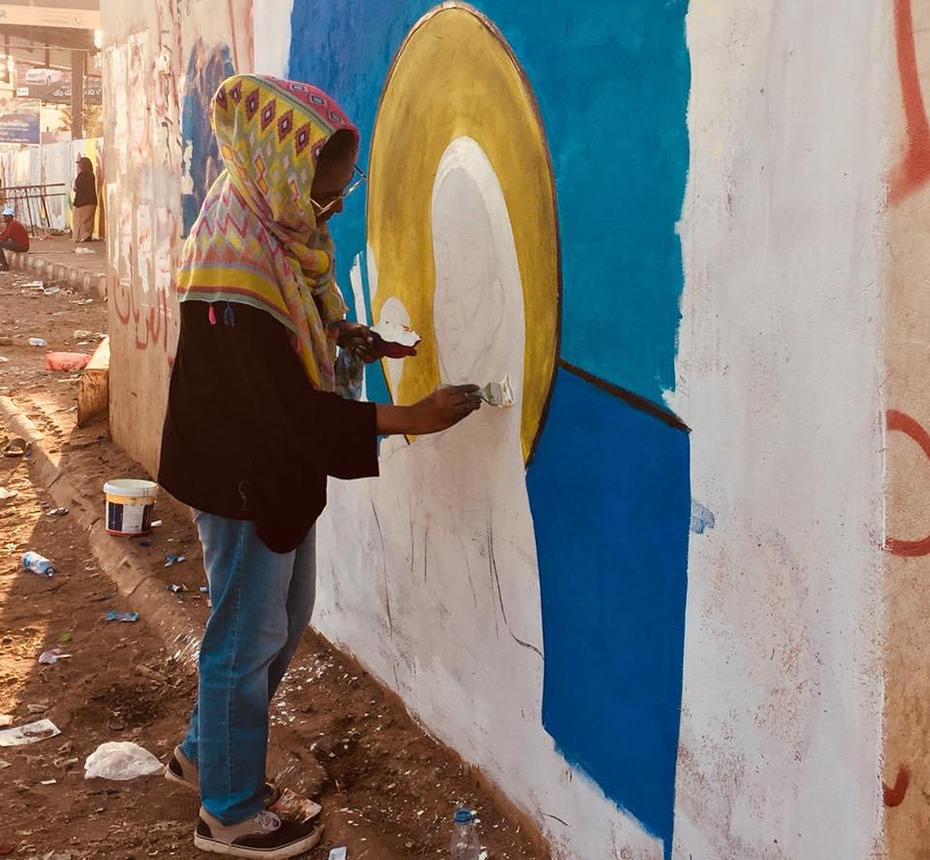 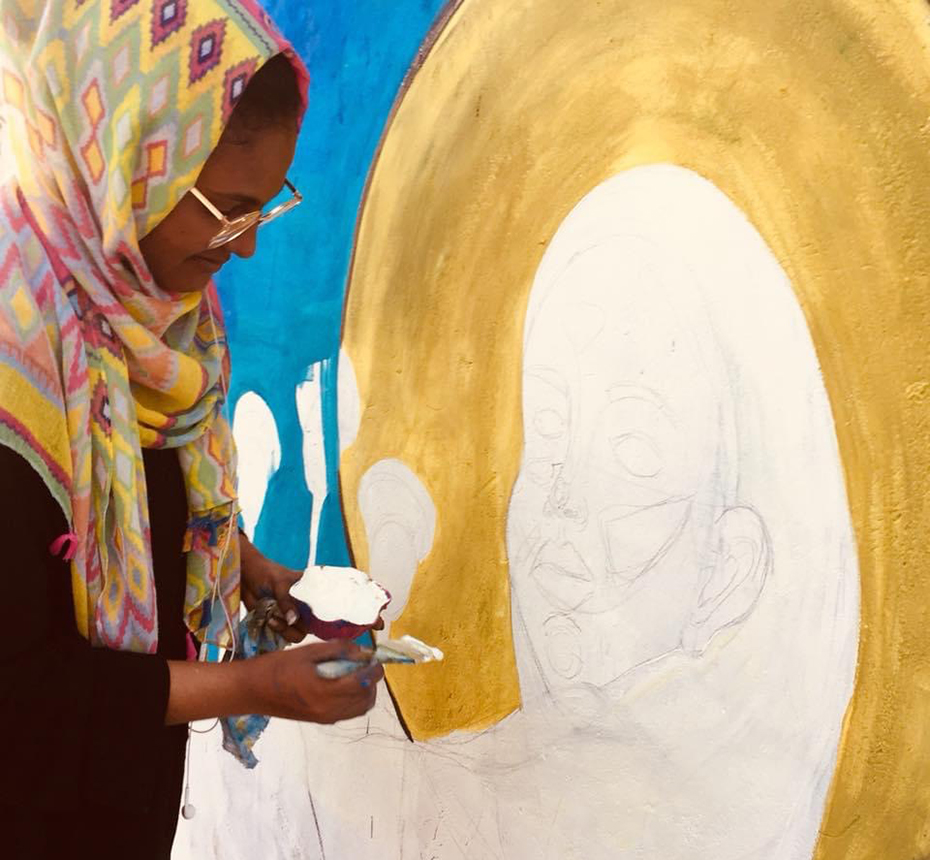 Reem, who works with a brush and acrylic paints, rather than stencils and a spray can, was one of several emerging and outspoken young female artists who created celebratory murals on city walls and documented the potency and power of Sudanese women who have long led change.

“We were never given complete artistic freedom to express ourselves, so being able to paint in the streets of my city so freely was definitely a new feeling that we all very much needed,” says Reem.

“Art helped raise awareness of the revolution and changed the public’s perception of the importance of art and how it affects and supports a case. Before 2019, there were a lot of restrictions and rules on what was considered art and many cultural institutions were controlled or monitored by the government.

“Creative institutions are now reemerging under new management or being revived and educational resources are being set up to further the ambitions of artists and art enthusiasts.” 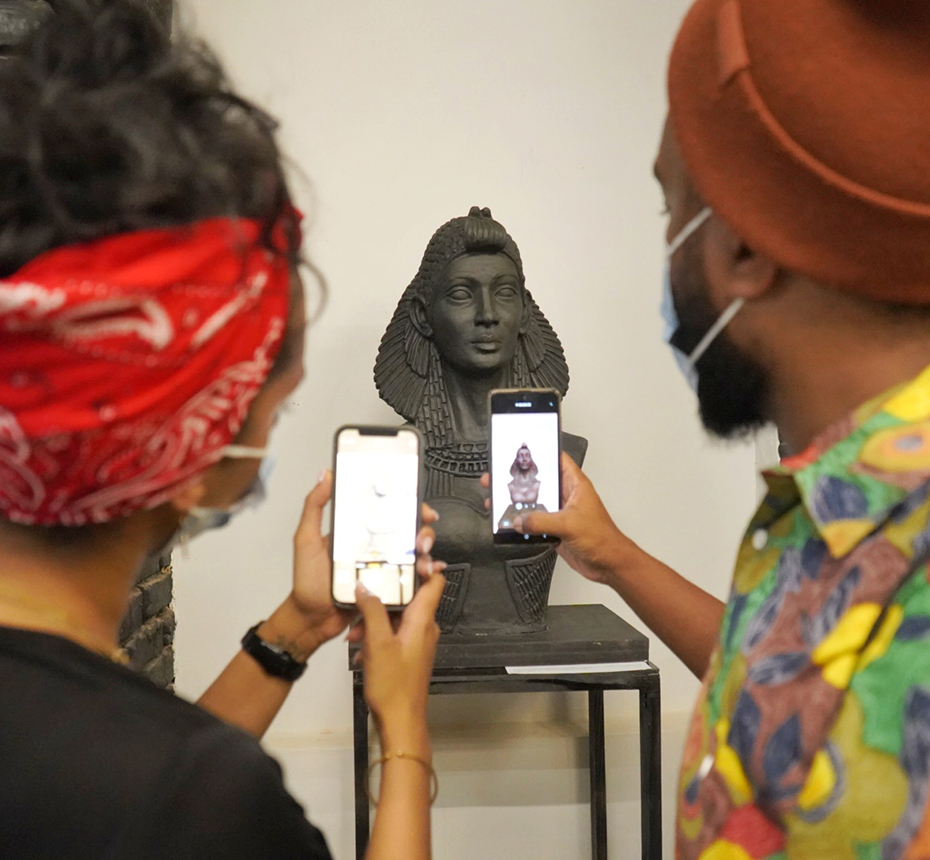 Reem has been enriching the art scene not just with her own vividly painted canvases but by supporting other emerging female creatives through her art platform, Bait Al Nisa ('House of Females'), which she set up in July 2020.

“The art scene, while changing, is still mostly made up of men,” she says. “So I wanted to create a space for prospective, self-taught female artists to grow together, for their talents to be showcased and for the arts to be truly open to all”.

Through Savannah Innovation Labs, a hybrid co-working space that invests in future change makers in Sudan, Reem has been able to host exhibitions, private views, workshops and training and establish an art studio that will host a first of its kind residency programme in Sudan.

Reem’s work continues to represent women, comment on social change and hint at a more positive future, as well as her own sentiments and life experiences and the issues and subtleties that she notices in her community.

Her portraits are intimate and powerful but with a surreal edge, often fed through in her subjects’ over-exaggerated eyes and in the paintings’ unconventional tones, skin coloured an unnatural shade. 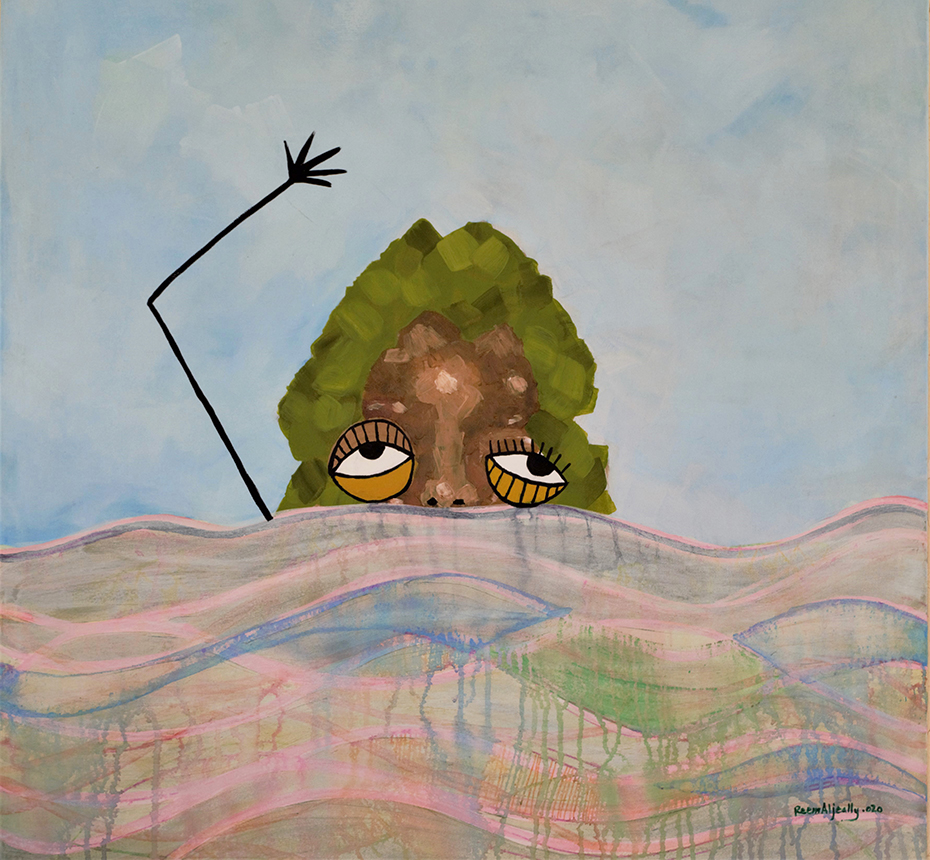 The overall effect is one of invitation: by gesturing viewers to participate in the works’ outlandish style, they might emerge with a more serious message about the issues, challenges, barriers and concerns that loom so large for ordinary Sudanese women; namely opportunity, social class and status, acceptance, perception, self-image.

“Eyes are a portal to a person’s mind, soul and life,” explains Reem. “In my work, that is a significant element that allows me to blend personal stories with the collective concerns of Sudanese women. It’s a starting point for musings into identity, growth, belonging, womanhood. The amplified effect that accompanies those eyes is meant to make the viewer a little uncomfortable, just enough to feel something.”

I want to continue showcasing the intensity of women and what they are capable of. 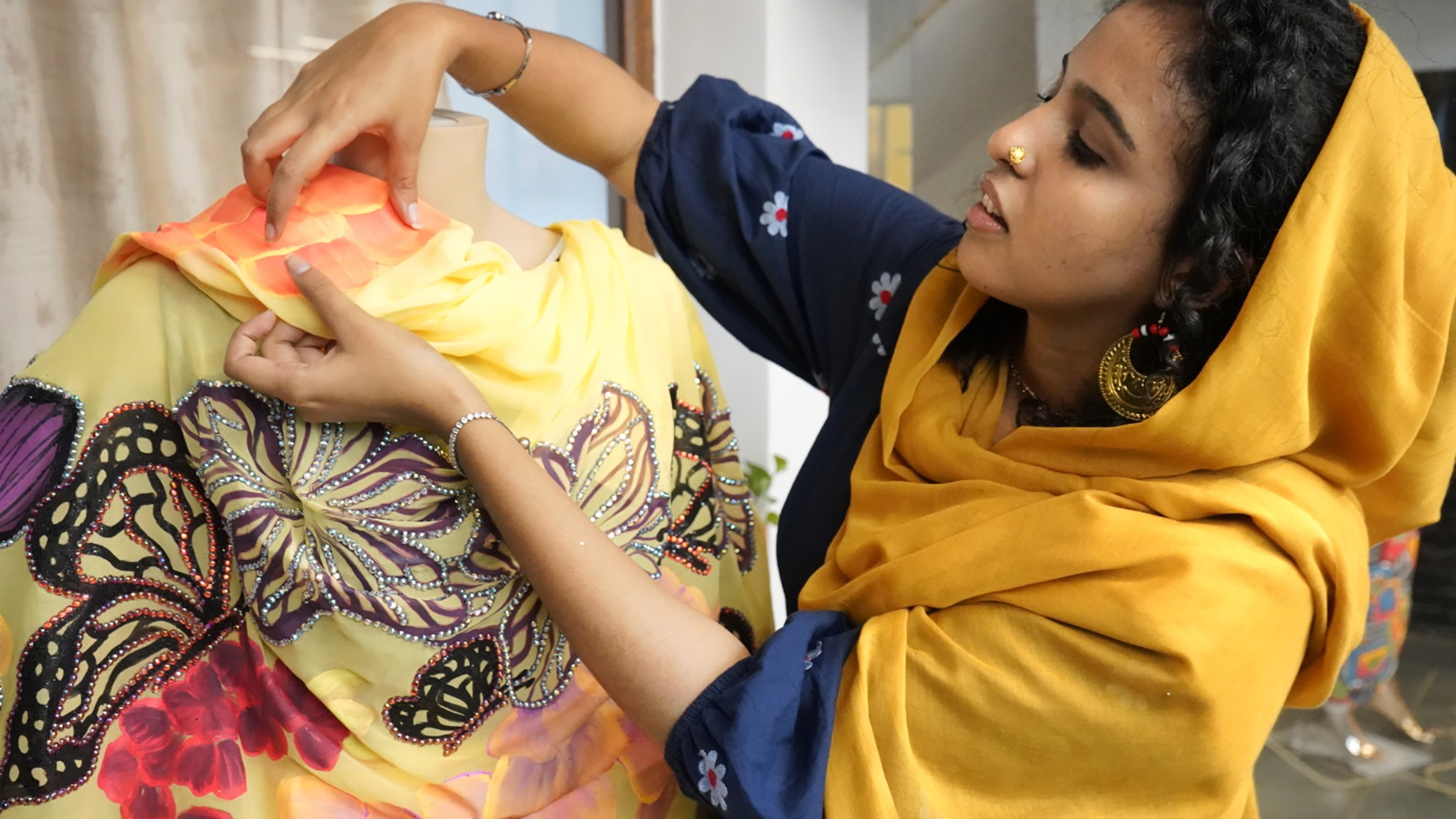 Now Reem is looking to bring her creative flair to photography. She’s using the toab, a recurring element in her paintings, in a series of new portrait photographs for NEW SPACES Media Labs. This Thomson Media programme runs from August to October, 2021, and is designed specifically for young creatives like Reem who are seeking to enhance their skills in online content creation, photography and mobile journalism.

“Female characters are important to my work,” says Reem. “So I have chosen to work with Sudanese women who are toub designers and who are modernising and reimagining the traditional garment using paint and colour. I want to capture these young designers in their own environment and add another dimension to my creative work. I also want to continue showcasing the intensity of women and what they are capable of.”

“NEW SPACES Media Labs” is a project of the Goethe-Institut and supported by the German Federal Foreign Office. Images courtesy of Reem Al Jeally and @BaitAlnisa.

Giving Sudanese a voice in rebuilding their economy

Mobile journalism during the revolution which gripped Sudan

Sudan: fair and accurate reporting in a time of crisis