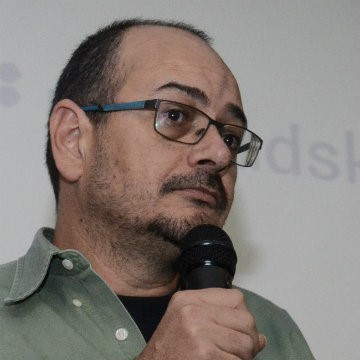 David is an award winning film producer and camera operator who’s most recent work with the Thomson Foundation has been in Ukraine for the Regional Voices project.

He began his career working for ABC News (US) and ITN (UK) during the war in former Yugoslavia. He was based in Kenya for the BBC, Swiss TV and others, covering East and Central Africa and then moved to Jerusalem where he worked for RTL4 (Holland) and RTL (Germany).

He is now based in his native Cyprus where he is a partner at Crewhouse Media, a film and video production house specializing in documentaries, news production and short fiction films.

He has produced a number of bi-communal documentaries and films for the United Nations with the aim of bridging the gap between the two communities of Cyprus.

He holds a Master’s Degree from Cambridge School of Art (Anglia Ruskin), in Film and Television Production and an HnD in Graphic Design.

David was a contributor writer in the Focal Press publication “Roll, Shooting TV News” and he is the artistic director of the International Children’s Film Festival of Cyprus.