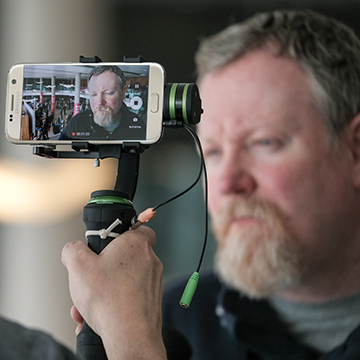 Glen Mulcahy has inspired and championed the growth of mobile journalism and more recently 360 across the globe.

A former head of innovation with RTÉ, Ireland's national public broadcaster, he also founded Mojocon – the first international mobile journalism conference which was held on an annual basis from 2015-2017.

Glen has trained in excess of 1500 journalists in Europe, the Middle East and the U.S., across television, radio, print and online and his specialities are Mobile Journalism, Video Journalism, DSLR FilmMaking and Photography. He is at the forefront of engaging with new technologies and working up solutions for how such technologies can transform the way traditional media organisations work. Glen’s currently working on 360 degree immersive storytelling and 360 Degree Drone Cinematography.

He is the founder of Titanium-Media, a media training and consultancy company.