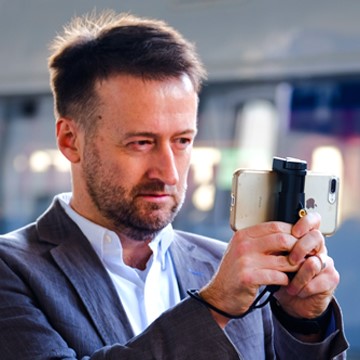 Mark is an experienced mobile-video consultant, journalist and trainer. He spent a number of years at the BBC, where he was one of the corporation's first self-shooting video journalists.

Mark shot and edited his own stories across programming ranging from news to sports, features and documentaries. His documentary work earned him a BAFTA nomination. For a time he was also the BBC's lead video journalism trainer.

Since leaving the BBC, Mark has helped pioneer mobile journalism around the world. He has delivered training for organisations such as the European Broadcasting Union, BBC, SKY, NOS Dutch Broadcasting, SVT Sweden and many other news companies.

Mark has also been invited to speak at major conferences including the Asia Media Summit in Malaysia and Mojocon in Ireland.  In addition, he presents a successful podcast on the topic of Mobile Journalism.  Mark says everyone should learn how to make quality video and multi-media content with their mobile devices, or waste a powerful communication tool.