Eleven women who participated in the inaugural Bettina Fund - Women in Media Leadership programme say it will transform their careers as they have gained confidence to own their career development paths.

The three-month programme launched in Kenya in September 2021 aims to help women working in the media overcome barriers in newsrooms and navigate an industry that remains dominated by men.

This is achieved through one to one weekly sessions with mentors and a series of webinars with high profile female media managers, entrepreneurs and senior journalists.

“I have grown my net-worth,” says course participant, Hellen Shikanda, Health and Science Reporter, Nation Media Group. “Now, I believe that leaders can be shaped. I have realised sometimes it takes close interaction with a leader to be one.” 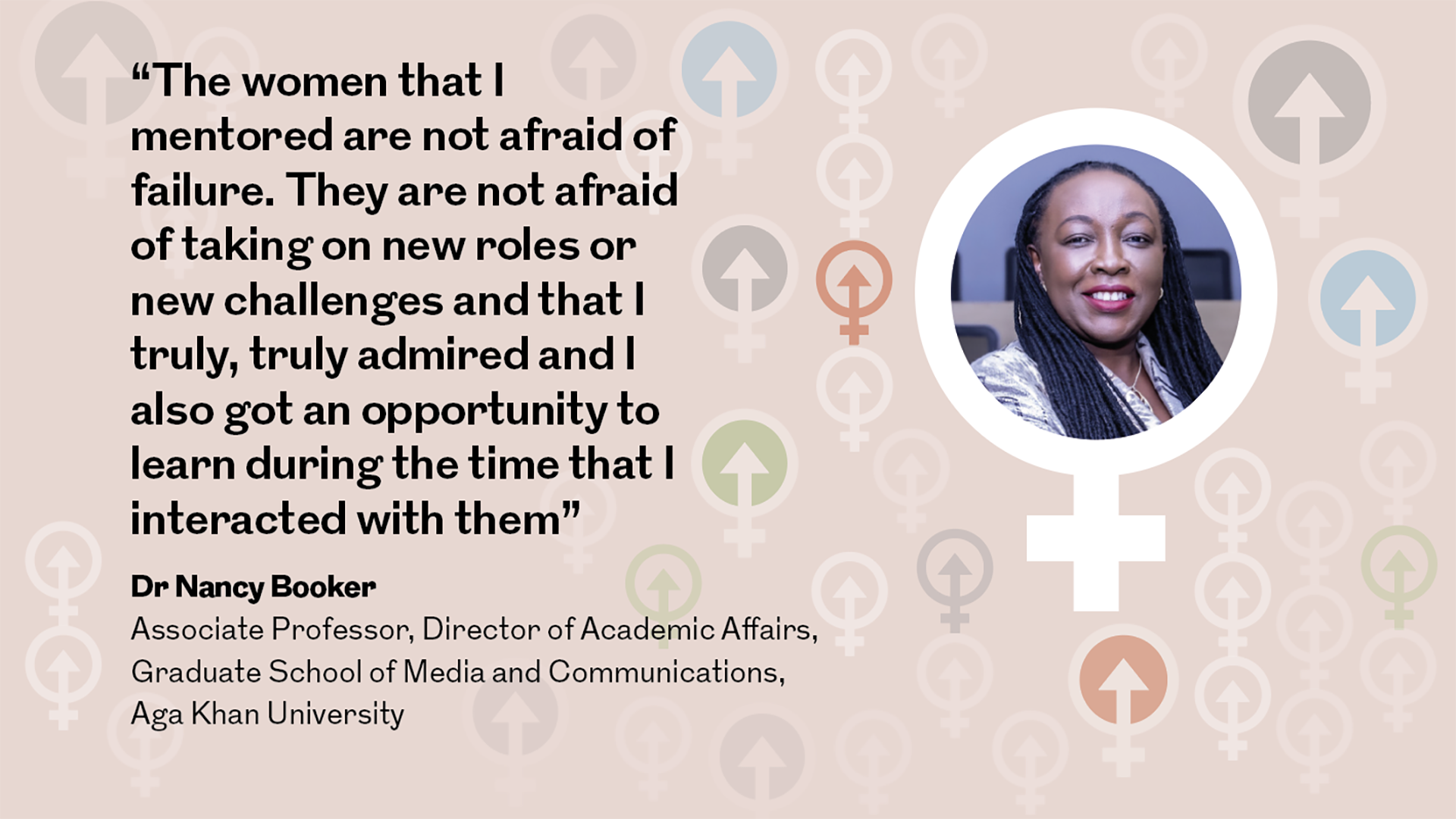 The women participating in the programmes were drawn from different areas of Kenyan media; the traditional legacy platforms of print and broadcast to digital start-ups.

The virtual nature of this programme caused by restrictions due to the pandemic benefitted journalists based outside the capital Nairobi. Travel costs and time often prohibit people travelling for face-to-face training but because every activity had to be done online the foundation was able to recruit participants from across Kenya with all women enjoying access to the same benefits.

In their feedback on the programme, mentees say the weekly sessions with mentors- all distinguished Kenyan women in the media - increased their confidence through improving personal skills and developing leadership competencies.

The webinars and mentor sessions provided a safe space for them to discuss openly their ambitions and provided guidance on how to overcome challenges in the workplace and as media entrepreneurs. 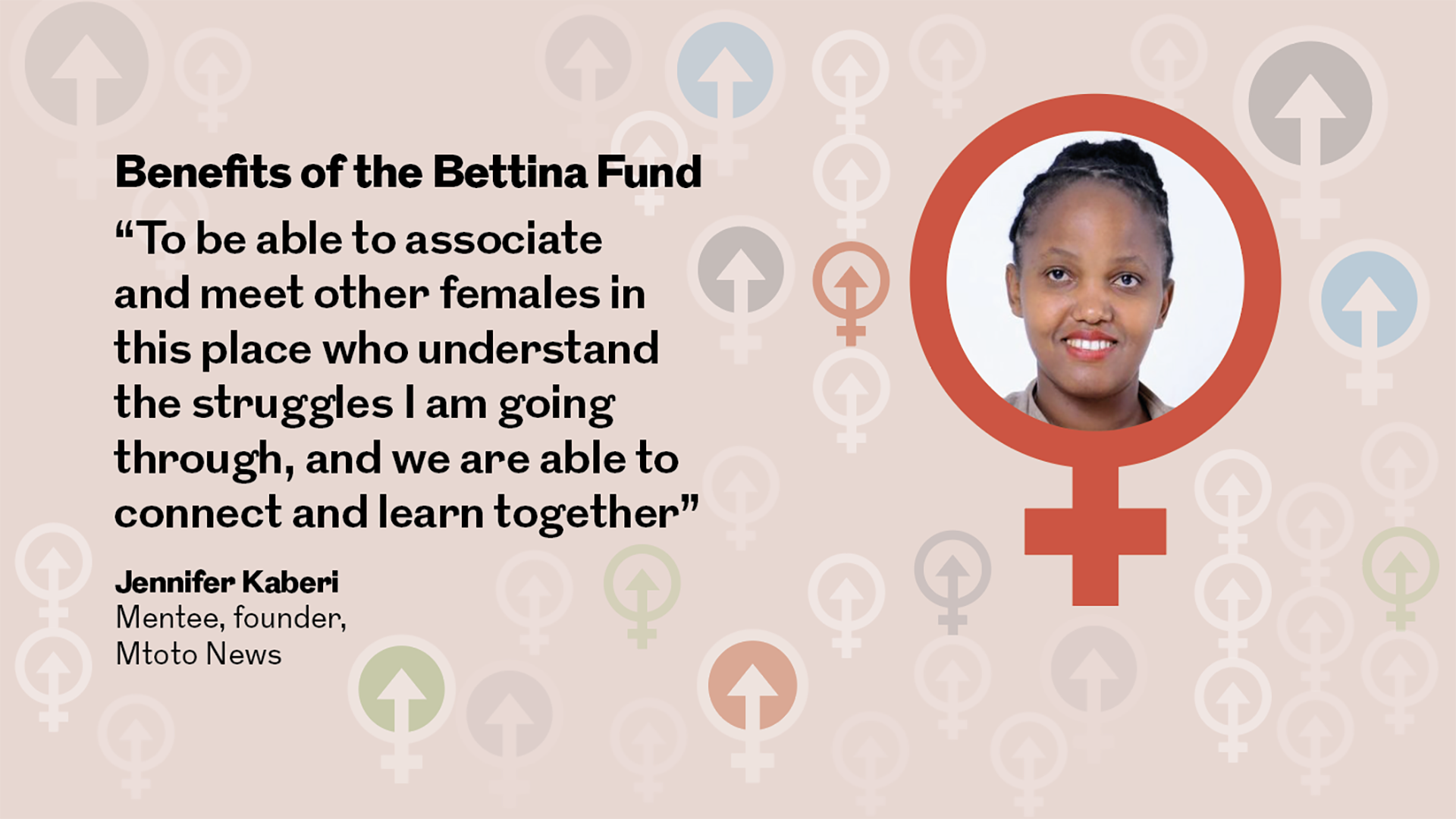 “The programme ticks all the boxes of a programme designed to better equip young journalists with the nitty-gritty needed in their field of practice,” says reporter and course participant Hellen Shikanda.

Ms Shikanda’s mentor was Pamella Makotsi Sittoni, the first woman to hold the position of executive editor and managing editor of the Daily Nation at the Nation Media Group.

In 2017 she was named the Laureate of the Women in News Editorial Leadership Award for Sub-Saharan Africa by the World Association of Newspapers (WAN-IFRA).

She emphasises the importance of mentoring female journalists as a way of bridging the gender gap in media organisations.

“The only way to challenge the gender disparity in media leadership is by creating a pipeline of women journalists with the right skills to take up senior positions,” says Ms Sittoni. “Through the Bettina Fund mentorship, we hope our colleagues will take the lessons we learned and avoid our mistakes, to get to the top faster and better prepared.” 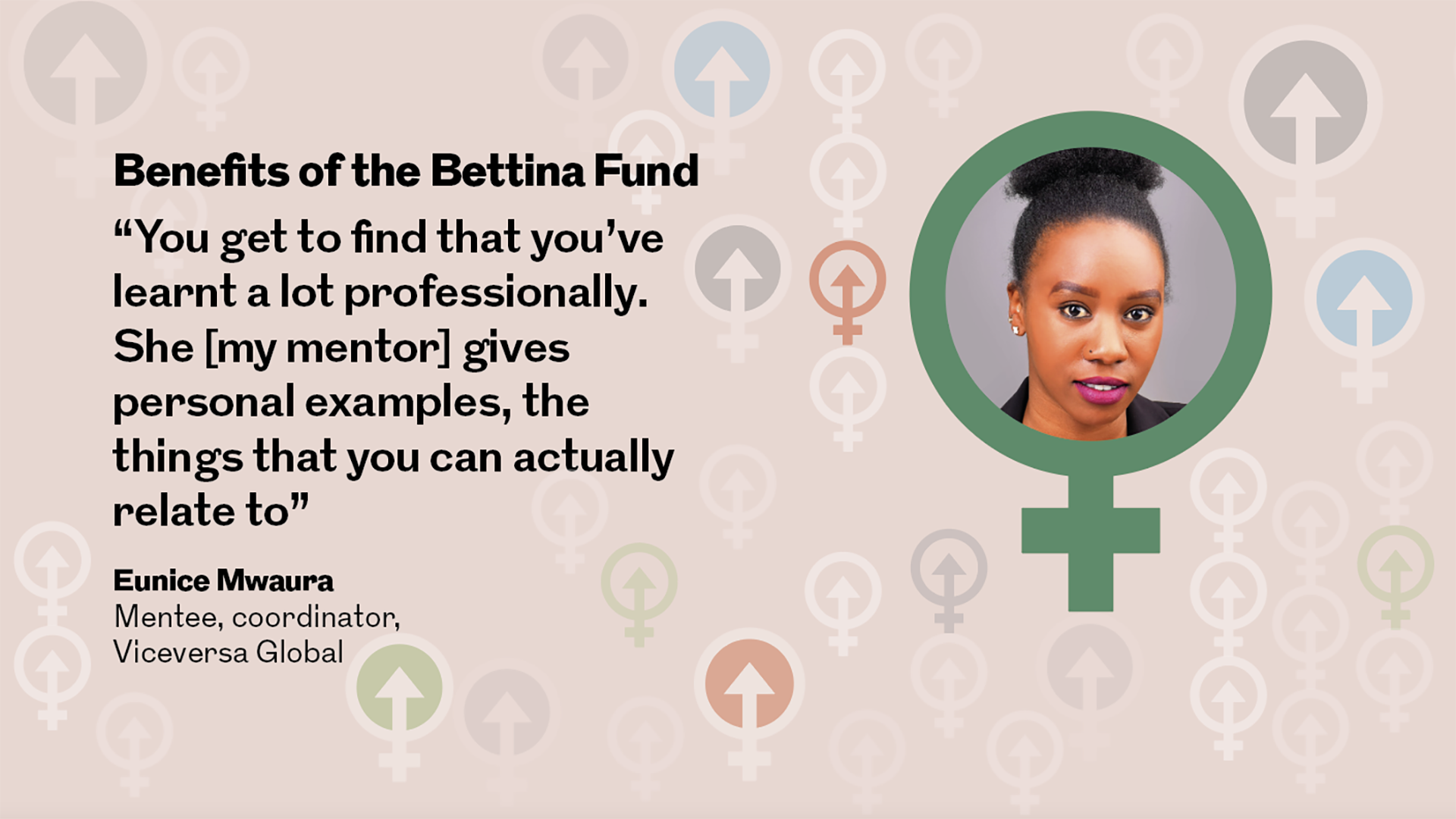 Florence Chepkorir, a news editor from Nakuru - a city north west of Nairobi in the Great Rift Valley; says the mentorship program enriched her professional network and taught her practical skills to advance her career. She now feels more confident to pursue opportunities in the media.

“Getting to interact with other women journalists was awesome,” she says. “It helped me appreciate the fact that I am not the only one facing challenges specific to women in the newsroom. This has helped me put on a brave face, focus and endeavour to achieve the best in my career.”

Empowering women in the workplace

The Bettina Fund has been set up by the Thomson Foundation in memory of its Director of Development Bettina Peters who died in 2020. Bettina was a tireless advocate for equality in the media. The aim is to empower women to take on senior roles in media organisations and build a sustainable network of women journalists and media professionals.

For the inaugural programme the foundation teamed up with the Baraza Media Lab, an initiative working to promote a strong and diverse media ecosystem from its collaborative space in Nairobi.

The aim is to extend the programme to include other countries in East Africa and replicate in other regions of the world.

The mentor and mentee relationship 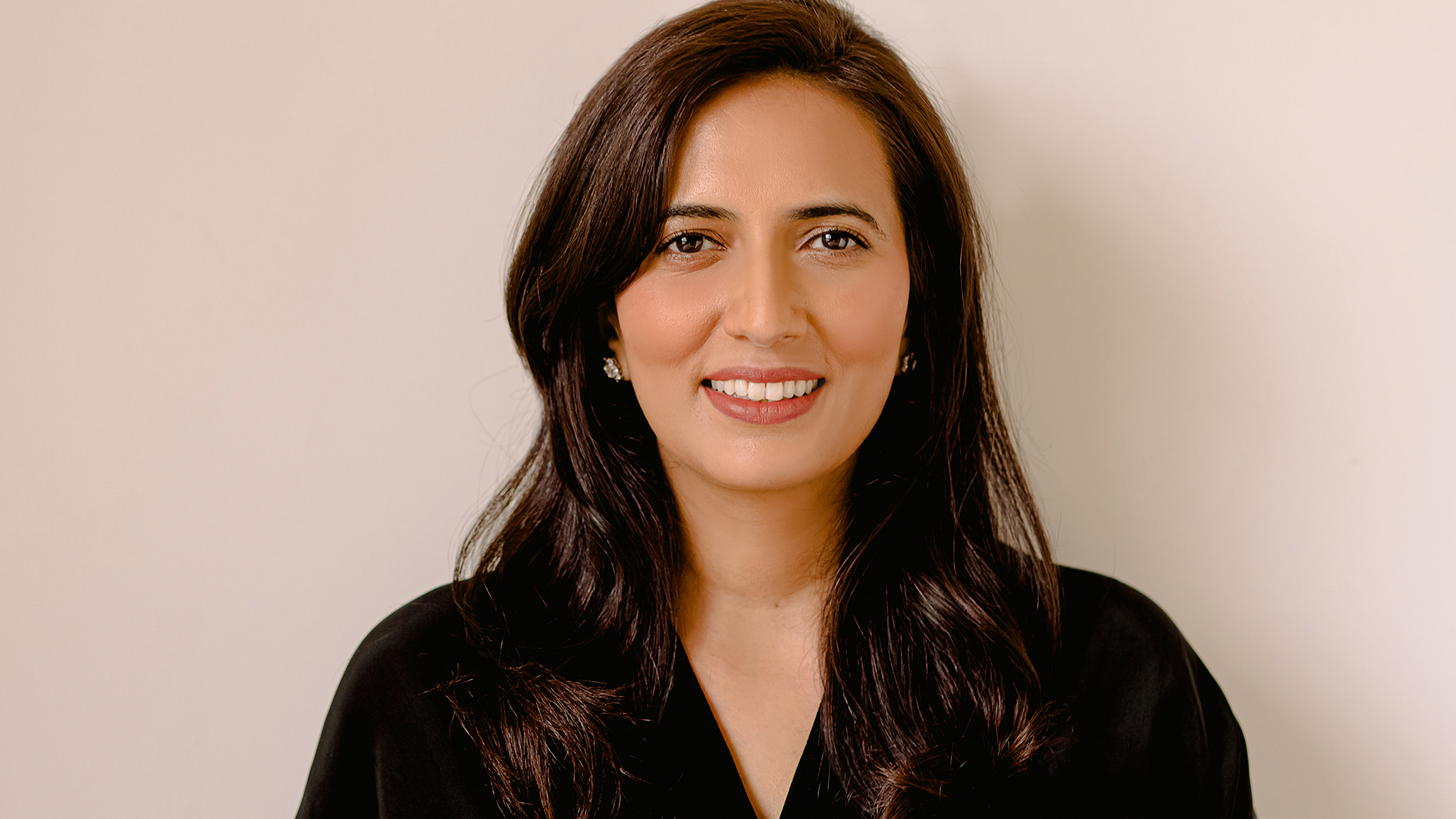 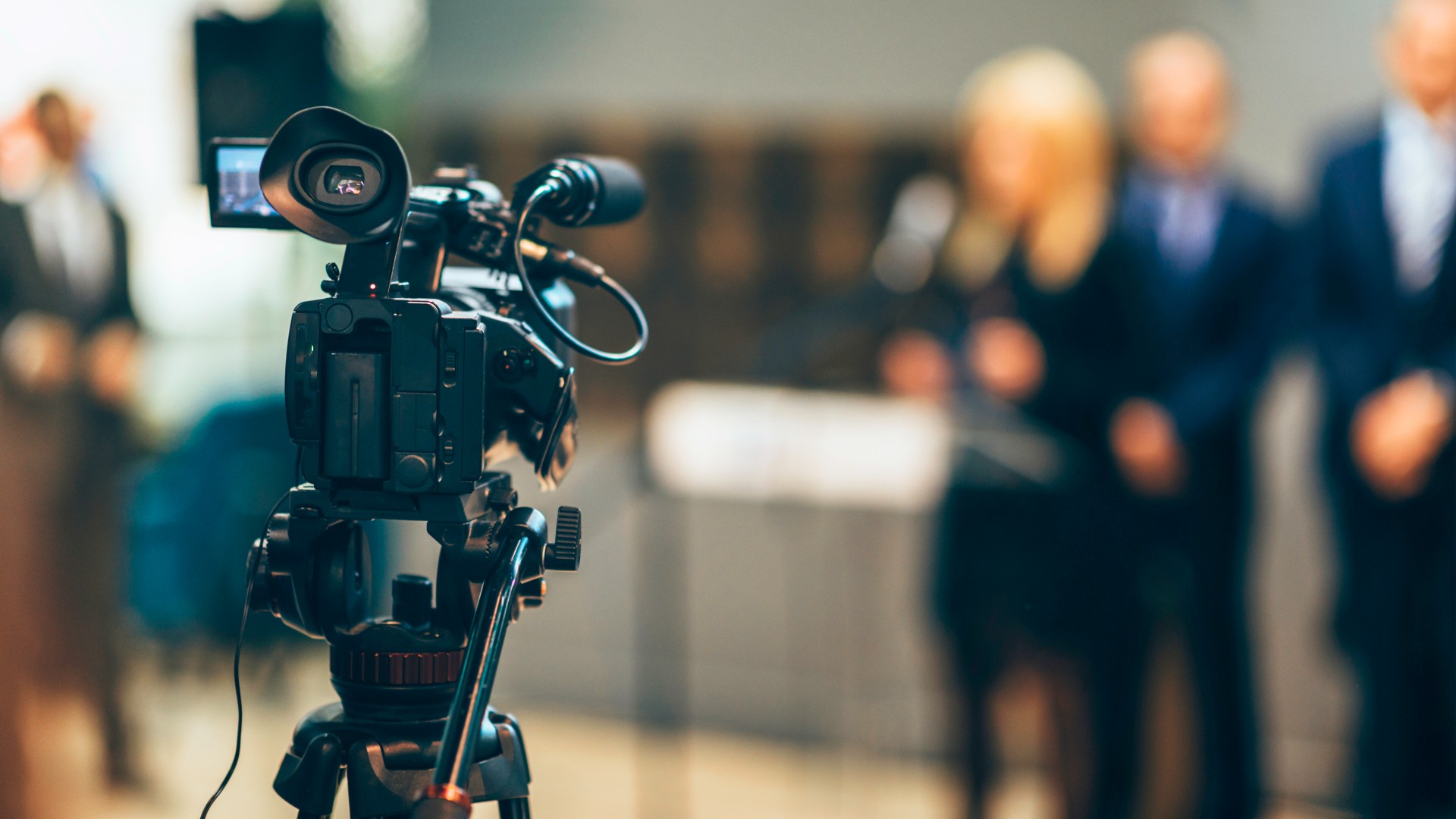 When diversity in newsrooms and leadership is not enough

Berna is Thomson Foundation's Africa specialist. Her main role is in the business development and promotion of our e-learning platform, Journalism Now.