This article is written by Hudaibia Iftikhar, a blogger working in the Khyber Pakhtunkhwa (KP) province of Pakistan. Despite being highly educated, she holds a masters in mass communications, she is unable to leave home to work because of the strict rules imposed on women which prevent her from working alongside male journalists.

Here Hudaibia explains the impact of societal restraints for women and her hopes for the future.

One day, as I was sitting on the lawn with my family enjoying some gossip, the woman living next door paid a visit. She was quiet and worried.

She explained how inflation was affecting her life. She was struggling to understand how she would be able to feed her children and pay their education fees.

Her visit made me think. Women struggle daily trying to secure their family’s future, but their voices are consistently ignored. So why is there such an ignorant attitude towards women who constantly use their conflict resolution skills? And, if they are responsible caretakers of their families, then why not for their nation?

The sole solution is if women get a chance at leadership.

Societal constraints present major obstacles for women. One example is the tradition of Swara in Khyber Pakhtunkhwa. The custom is that if a person kills someone, one of the women from the murderer’s family should be given to the bereaved family as compensation. A 23-year-old innocent woman named Sana Gul went through this harrowing experience. Her brother killed a neighbour in a row over a path owned by Sana’s family. The Jirga, a council of elders who decide village cases, agreed that Sana should be given in marriage to the murdered man’s brother. Although illegal, the law is rarely enforced. Male elites and societal constraints deprive women of their rights to reject the Swara.

After the Russian invasion of the neighbouring country of Afghanistan in 1979, a faction of radical scholarship in Pakistan influenced the population, forcing women away from politics and thereby from performing leadership roles. Some religious scholars proclaimed fatwas, a religious mandate, that living under women’s leadership is not lawful.

So what’s the solution? Suppose the Pakistan government passed a bill providing more protection to women? How would it be implemented and how would people be made more aware? How much time would it take for the whole cycle - from legislation to execution to the judiciary - to work? The sole solution is if women get a chance at leadership.

Limited participation of women in Pakistan’s politics affects not only a female’s rights but also legislation. Since the inception of Pakistan, there has been competition for political power between the male elites of the country. The female population is 51%. There is a need for more strong female personalities to become role models and motivate other women into knowing their strengths and values.

Four times martial law has fast disrupted democracy, taking the country backwards. Fatima Jinnah, Benazir Bhutto, Sheerin Mazari and Maryam Nawaz are just a few women who’ve entered the political arena but in the male-dominated political world, leadership is harsh for women. Pakistan has fewer women participating in politics than neighbouring India. The city Uttar Pradesh (UP) which has a population nearly equal to Pakistan, has reserved 40 percent of its assembly seats for women.

If women political leaders enter government, it will be easier for them to understand the issues that affect females. They can help implement the bills that have been passed by the assembly regarding women’s rights, but have not been enforced up till now. In 2020, Pakistan’s parliament passed a law to stop the abductions of under age girls. The Zainab Aalert Bill, named after a six-year-old girl who was abducted, raped and murdered, seeks to expedite the investigation and punishment of perpetrators of child abuse. 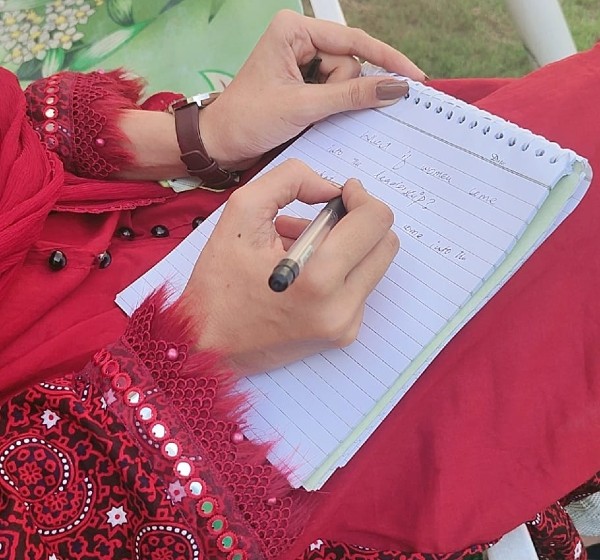 Breaking through the stereotypes

The stereotypical perception in Pakistan is that the title of ‘leader’ does not suit women because they are more prone to domestic violence and ‘emotions’. In other words, a woman's fear of her reputation being damaged, can also be the factor that stops her from participating in politics or taking on leadership roles. But despite Khyber Pakhtunkhwa being a conservative society, some women have broken through these stereotypes and achieved leadership positions. Shakeela Naz, the first female member of Takht Bhai Bar Council, began practising as a lawyer in 2019.  She is also the first female Vice President of any bar council in Khyber Pakhtunkhwa province.

In a seminar, Shakeela Naz explained that expectations are shifting, and women are playing an active role in jobs which were once considered limited to men only. She has managed and arranged several seminars raising awareness of women’s rights at local and national levels.

When we see women like Shakeela Naz who fight for their rights, and brave women on our television screens like Marriyum Aurangzeb, Information Minister of Pakistan, who have overcome hurdles to achieve prominence in society, their struggles and hard work make us feel proud. We feel that in future we will not be constrained by the term ‘male dominance’, but will instead lead our lives unreservedly.

In conclusion, women face many challenges and barriers. The question of participation and leadership in Pakistan is still a highly challenging one. There are many who question whether women should be given opportunities to represent their nation internationally or be limited to staying in the home. One can break the chains of societal constraints and be an example for other women. A rising figure is Maryam Nawaz, the daughter of ousted Prime Minister Nawaz Sharif. She is holding rallies and addressing political gatherings, but this is limited to Punjab, where the literacy rate is comparatively higher than in other areas of Pakistan such as Khyber Pakhtunkhwa and Balochistan.

Women must be courageous enough to make a bridge out of the stones that society throws in their way and not a wall that can restrict them inside a closed door.

Hudaibia Iftikhar is one of a number of women bloggers taking part in a training and mentoring programme as part of the Valley Voices project which looks to enhance the political participation of women through local media engagement in the Khyber Pakhtunkhwa (KP) province in north west Pakistan. The overall goal of Valley Voices is to break with prevalent social conventions and hierarchical structures in order to support women with little to no access to formal education to be an active part of public life.

Thomson Media is working with partner the Tribal News Network (TNN) to develop new radio broadcasting and online formats with and for women.